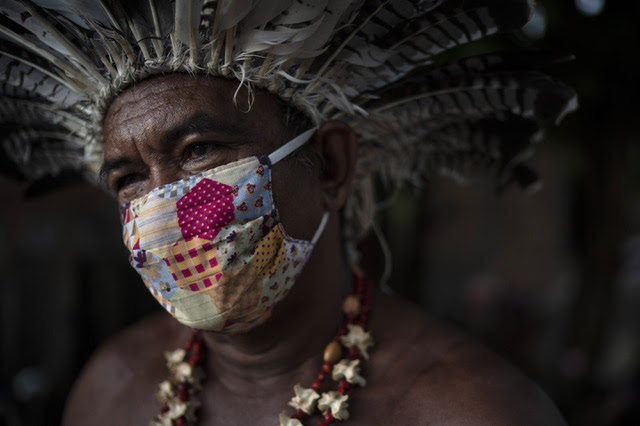 The indigenous people dwelling up the Solimoes and Negro rivers that merge in Manaus to form the Amazon River tried for weeks to seal their reserves off from the virus, pleading for donations while awaiting government deliveries of food so they could remain isolated. It didn't come for many, indigenous advocates said.

The Upper Solimoes basin has 44 tribal reserves and has emerged as the Brazilian Amazon's indigenous infection hotspot. Testing is extremely limited, but shows that at least 162 of the area's approximately 76,000 indigenous people have been infected and 11 have died. There are more than 2,000 confirmed infections in parts of the area not overseen by the government's indigenous health care provider.

The South Korean government and nonprofit organizations are offering quarantine and medical supplies to countries fighting the novel coronavirus in a bid to boost relations in challenging times.

According to the Ministry of Patriots and Veterans Affairs on Monday, the 70th Anniversary of the Korean War Commemoration Committee will deliver 10,000 face masks and other health protective items to the members of native American Navajo tribe who fought in the 1950-53 Korean War.

Currently, the native tribe suffers a higher per capita number of COVID-19 cases than citizens in other US states. With some 356,000 Navajo people residing in parts of four states, including Utah, Nevada, Arizona and New Mexico.

Some 800 Navajo men participated in the Korean War seven decades ago and approximately 130 of them are alive.

The number of confirmed cases reported each day has risen steadily over the past week as more testing has taken place.

Deaths have also spiked over the past week, although many occurred in previous weeks and are just being added to the system now because of reporting lags and a new death certificate surveillance process. The number of deaths reported each day represents the additional known deaths identified by the Health Department that day, but they are often not identified on the actual death date and could have occurred weeks prior.

Of the statewide identified cases overall, 47% are men and 53% are women. But men made up a higher percentage of deaths, with 55% of the deaths men and 45% women as of Sunday.