A draft proposal was circulated yesterday that was used as a basis for Senate discussions. The proposal was immediately panned by Republicans in the Senate and in the White House with differing views of the role of the federal government during this crisis.

Unemployment assistance is at the center of the intra-party dispute over the next round of funding. The enhanced unemployment assistance of an additional $600 will begin to expire today. Some Republicans in both Congress and the Administration feel the enhanced benefit provides a disincentive to go back to work. Democrats feel it is necessary, but they are not alone. Most economists agree the enhanced unemployment assistance has buoyed the economy. Withdrawing the support now will lead to credit issues, less spending, and lower job prospects - all when jobs are being lost at record rates. Yesterday, another 1.4 million jobs were announced lost in the past week with a significant portion blamed on the expiration of the PPP program which subsidized job employment for small businesses and non-profits.

Republicans are caught in the middle of the health, economic, and political storm with no obvious life rafts. They will need to move some form of relief. Here is what is up for debate:

“I don’t want a GOP proposal that’s going to include state bailouts...Every day they wait is a good day for the country.”

Chart of the Day: The unemployment situation is really, really bad (Axios) 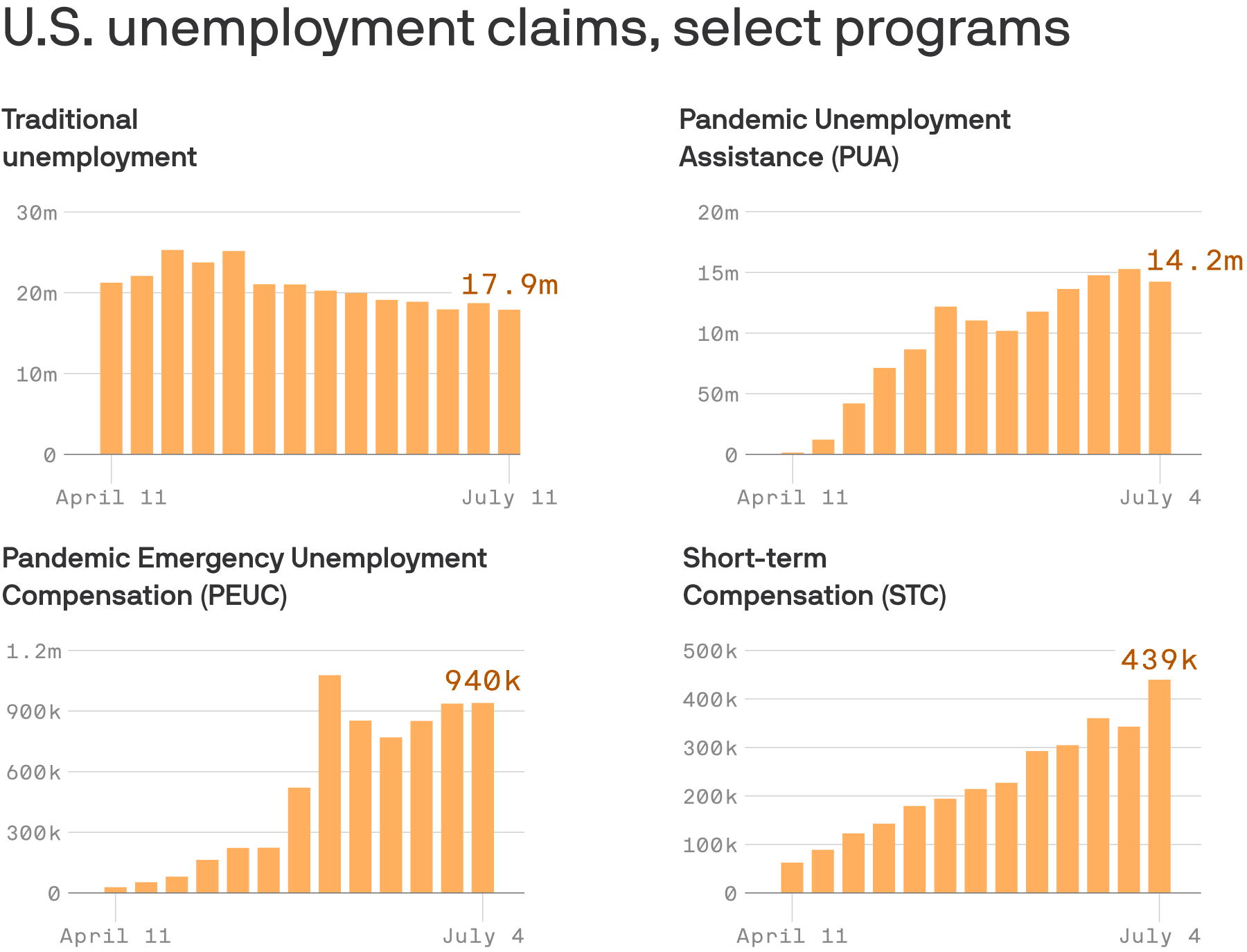 Such programs have helped uphold American consumers' spending, but have been quite costly — government spending in June totaled $1.1 trillion, according to CBO estimates — more than triple outlays in June 2019, or about a $763 billion increase.

The unemployment picture looks to be worsening right as the $600 in additional federal unemployment assistance expires.

The Yurok Tribal Council recently approved a $2.1 million project that will significantly boost Yurok Connect’s data transmission speeds and expand its coverage to many family homes that have never had access to the internet.

The Coronavirus Aid, Relief, and Economic Security (CARES) Act-funded, Yurok Connect Broadband Project is expected to be completed before the end of this year. Launched in 2013, Yurok Connect is a Yurok Tribe-owned, wireless internet service provider.
...
To date, the Tribal Council has strategically invested CARES Act dollars into multiple projects that address different challenges posed by the COVID-19 crisis. For example, last week, the Tribe broke ground on a 20,000 square foot emergency operations center, which will serve as the headquarters for the Yurok Incident Command Team. CARES dollars were used to start a forgivable grant program for tribal business owners and entrepreneurs. The Tribe has also sent $1,250 in relief funding to tribal citizens who are facing financial challenges because of the pandemic and are over the age of 18 by December 30, 2020.

Executive branch divisions, departments and offices that were set to reopen July 27 will stay closed until Aug. 16

South Dakota lawmakers on Tuesday called for formal consultation processes between tribal and state governments following Gov. Kristi Noem’s handling of a conflict over coronavirus checkpoints set up by tribes.
...
Noem and the tribes differed in their accounts of how the dispute evolved. The governor claimed that her threat of a lawsuit only happened after weeks of behind-the-scenes communication because the tribes had not received permission to set up the road stops on highways that belonged to the federal or state government. They are illegal, she argued. But the tribes countered they had consulted with federal and state authorities and that their position as sovereign nations allowed them to set up the checkpoints.

For inclusion in future morning brief emails, please send your updates from your respective organizations or notes and news from tribes to Ellie Beckett at Ellie@nafoa.org.