After ten meetings that included detailed discussions on what each side considers necessary relief and the price tag for that relief, both sides are walking away for now and taking their message to the public. The GOP negotiators, Secretary Mnuchin and Chief of Staff Meadows were not willing to give on larger price tags and the Democrat negotiators of House Speaker Pelosi and Senate Minority Leader Schumer were not convinced the Republicans had a true understanding of the scope of the problem.

Political pressure will continue to grow as the CARES Act funding begins to unwind. Unemployment assistance enhanced by an additional $600 per week expired last Friday, making today the first full week without the enhanced benefit. Unemployment claims, although smaller than expected, continue to grow and employees were likely kept onboard with business owners eying more relief. Schools are reopening with added precautions and expense while government budgets and employment, the last indicators to be realized, will become more strained.

The economic data may reveal some irony in the negotiations. The enhanced unemployment and other relief measures has kept debt, including mortgages and student loans, at relatively low delinquency and default rates while also keeping business and government spending at increased levels during this downturn. This means the high unemployment claims (even with a falling unemployment rate of 10.2%) is minimized during an election cycle, the economy is kept floating, and the market remains high. Taking away relief may not help Republican prospects longer term. The gamble is that longer term may be after the election.

Tribal governments along with states need to be weary of executive orders from President Trump that will target unused CARES Act funding, specifically unused Coronavirus Relief Funds, for repurposing to unemployment assistance. Although this is highly unlikely, the threat of repurposing brings to light the significant amount of unused government funds which feeds into the Republican narrative of a reduced need.

The messaging wars will begin in earnest this weekend. 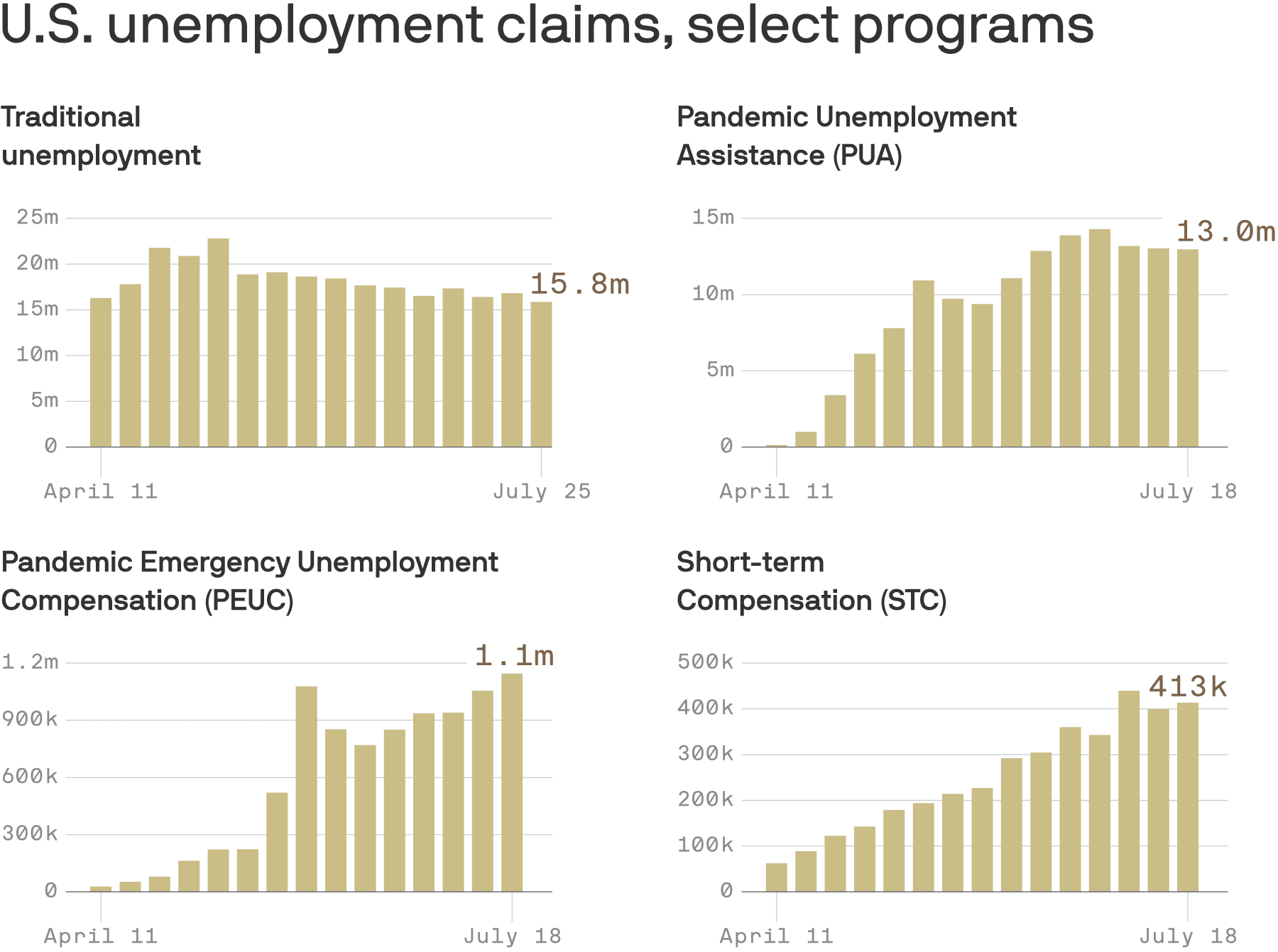 Yes, but: The number of people receiving some form of unemployment insurance from the government as of July 18 rose to 32.1 million, up by 1.3 million from the previous week.

The coronavirus pandemic has caused a "reallocation shock," economists at the Chicago Fed write in a new blog, and that could increase unemployment by up to 4 percentage points and keep it elevated for two to three years.

Are elders around the reservation getting the attention they need during the pandemic? And, most importantly, do they have enough water and food? I decided to find out.

I began by interviewing people who live in the Northern Agency in northwest New Mexico, where my family is rooted. A large number of people over the age of 65 — nearly 350, according to Navajo Nation data — live in four remote communities along the foothills south of Shiprock. Dozens are 75 or older.

After months of trying to keep the coronavirus at bay, the Fond du Lac Band of Lake Superior Chippewa has confirmed the first two positive COVID-19 cases on its reservation in northeastern Minnesota.
...
State health officials are partnering with Minnesota tribes to improve testing and surveillance for COVID-19 in their reservation communities, Dionne said, "to see what the prevalence is in the community and to really watch for hot spots in their congregate living settings."