View this email in your browser 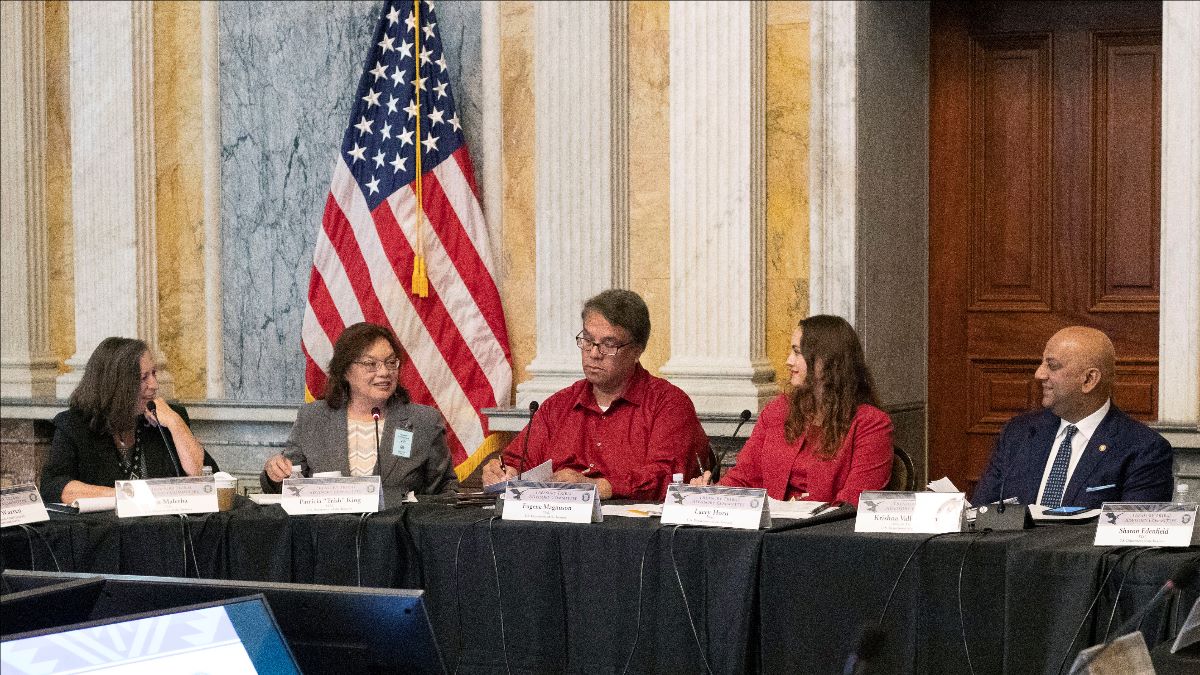 Washington D.C.—The Treasury Tribal Advisory Committee (TTAC) held its second meeting on September 18, 2019 at the U.S. Department of the Treasury in Washington, D.C.

All seven members of the TTAC were present and actively discussed the priority issues within the committee's purview. Key federal partners from various offices within Treasury and the Internal Revenue Service were represented at the meeting. The majority of the meeting was focused on the Tribal General Welfare Exclusion Act and its statutory mandates for the committee and other taxation items more broadly. As the lead supporting organization, NAFOA is actively helping with administrative and organizational items including drafting of the proposed TTAC bylaws and policy issue matrix.

As a follow up from the inaugural meeting, the preliminary working groups on General Welfare Exclusion, Dual Taxation, and Tribal Pensions/Parity were officially motioned and approved for inclusion as formal subcommittees. The TTAC reserved the right to create additional subcommittees as needed.


Background for the TTAC

The Tribal General Welfare Exclusion Act of 2014 (P.L. 113-168) was signed into law by the President in September 2014 and required the establishment of a seven-member TTAC. The committee members have a broad mandate to "advise the Secretary on matters relating to the taxation of Indians." Among the duties, the TTAC helps establish training and education programs for Internal Revenue Service field agents who work with tribal governments and tribal finance professionals. NAFOA serves as the lead supporting organization for the TTAC.

"Hard work does pay off. Sooner or later but it does. At today’s Treasury Tribal Advisory Committee (TTAC) Public Meeting at the U.S. Department of Treasury Building the following Subcommittees were formed:

Today, all TTAC members will start an adventure by stepping out of our comfort zones and breaking from the monotony of what is expected. It means soliciting feedback and consultation from all Tribal Nations that will only strengthen our Sovereignty and create tax parity for all."

The first order of business of the TTAC was to suggest the Treasury Department amend the TTAC Carter to reflect June 20, 2019 as the official commencement date for the staggered appointments. Vice-Chairman Eugene Magnuson motioned to suggest an amendment to the TTAC Charter.  Councilwoman Sharon Edenfield seconded the motion. The motion carried unanimously.

The second order of business was the approval of the proposed TTAC Bylaws. Rebecca Benally motioned to approve the drafted bylaws. Chief Lynn Malerba seconded the motion. The motion carried unanimously. The bylaws are pending further review by Treasury.

The TTAC received multiple comment letters that were acknowledged and submitted for the record. The Santa Ynez Chumash Indians submitted a public comment letter that focused on the safe harbor for the use of casino net revenues for GWE. Sam Cohen, Government Affairs and Legal Officer, provided oral comments to the same. The Lummi Indian Business Council and the Prairie Band Potawatomi Nation both submitted comments which were similar in nature that comments on the TTAC Operating Procedures and Bylaws. Oral comments and public comment letters were submitted by delegates from the Oglala Lakota Nation on behalf of Chairman Julian Bear Runner and the Great Plains Tribal Chairman’s Association requesting support from the TTAC to preserve current IRS offices in Rapid City that benefit all of the Great Plains tribal nations who may not have the resources to travel further distances for their services. Christie Jacobs, Director, Indian Tribal Governments/Tax Exempt Bonds at the IRS, received the letter and provided it to the IRS Commissioners Office.

Jackson Brossy, Executive Director of the Native CDFI Network, gave oral statements concerning resource allocation to Native CDEs and other tax incentives including New Market Tax Credits for continued viability. Clint Hastings, Senior Portfolio Manager, CDFI Fund responded to the comments and encouraged participation at the advisory board meetings to raise the issues further. A representative from the Absentee Shawnee Tribe of Oklahoma addressed the TTAC. Chairwoman Horn read and acknowledged NCAI Resolutions: #SD-15-036 Support for Tribal Tax Reform and Setting Tax Policy Priorities and #MOH-17-019 Requesting Agencies to Comply with the Tribal General Welfare Exclusion Act, PL 113-168, by Recognizing the Treatment of Income for Purposes of Benefit Eligibility. All of the public comments and oral statements will be made available in the future subject to accessibility considerations from the Treasury Department.

The third order of business concerned the development of a priority and issues matrix by NAFOA to include: a discussion of issues, proposed solutions, action items, and updates as the TTAC moves forwards. NAFOA will seek input from other intertribal organizations as they develop these items. Chief Lynn Malerba motioned to charge NAFOA with the development of the priority and issues matrix. Vice Chairman Eugene Magnuson seconded the motion. The motion carried unanimously.

The majority of the discussion focused on the implementation of the statutory mandates from the TGWEA on the key issues surrounding the definition of lavish and extravagant and the training of IRS and tribal finance professionals. The TTAC and federal partners agreed that before training can happen there needs to be tribal consultation on these items in tandem with the TTAC work to address the wide-ranging and broad determinations of culture, ceremony, and tradition from each tribal nation.

In addition, Vice-Chairman Eugene Magnuson and Councilwoman Sharon Edenfield continued the conversation on the moratorium of audits while regulations are being developed and the disconnect in certain individual Indian audits. Christie Jacobs from IRS responded on the automatic nature of the mismatch of reported information and encourages those affected to contact her office to begin working on solutions.

One salient item that all TTAC members shared was the importance to recognize that the origin of funds for General Welfare Programs should not be considered in the determination of eligible funds. This is for the reason that tribal nations across the United States were forced to develop economic development vehicles to raise capital to fund government services and provide services to their citizens precisely because the federal government did not live up to its trust and treaty obligations.

To follow the points being discussed in the meeting, DFO Vallabhaneni went further to quote the TGWEA, “Ambiguities in section 139E of such Code [Internal Revenue Code of 1986], as added by this Act, shall be resolved in favor of Indian tribal governments and deference shall be given to Indian tribal governments for the programs administered and authorized by the tribe to benefit the general welfare of the tribal community.”

Call for Indian Country Experts to Volunteer on Subcommittees:

The fourth order of business was to motion for a call to Indian Country for experts to serve on TTAC subcommittees. Chief Lynn Malerba motioned. Chairman Ron Allen seconded. The motion carried unanimously.

The fifth order of businesses was to formally establish three subcommittees on General Welfare Exclusion, Dual Taxation, and Tribal Pensions.

All motions for each nomination was seconded and passed unanimously.

Councilwoman Sharon Edenfield discussed the Kiddie Tax and to request a forum with the Social Security Administration at a future date to discuss impacts of general welfare programs on eligibility for certain benefits. Treasury partners outlined upcoming consultation on October 8, 2019 regarding the Income Tax Treatment of Corporations Chartered under Tribal Law at NAFOA's Fall Finance and Tribal Economies Conference. Other consultations will be shared via the Treasury Tribal Affairs website.

NAFOA is pleased to continue working with the TTAC and coordinating with other national and regional tribal organizations to further our common goal of making tax policy and programs work for Indian Country. To provide comments directly to the TTAC you can contact TTAC@treasury.gov.

The next meeting of the TTAC will take place on December 3, 2019 at the U.S. Department of the Treasury at 1500 Pennsylvania Avenue NW, Washington D.C. Registration will be sent out as it is available.


Want to change how you receive these emails?
You can update your preferences or unsubscribe from this list.