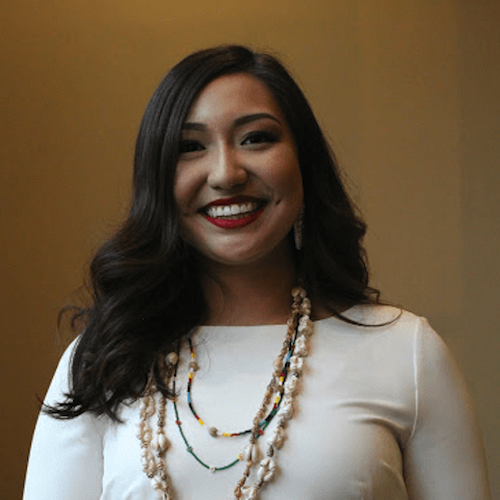 “The NAFOA summit and conference will provide the opportunity to learn methods to be more effective in economic development. With the resources and tools available, I want to enhance my knowledge and skills in order to advance the economy across Indian Country.”

Sophie Maria Tiger is an enrolled member of the Comanche Nation of Oklahoma and also comes from the Standing Rock Sioux Tribe. As a Gates Millennium Scholar, she is in her final year at the University of Oklahoma in hopes of obtaining a degree in Political Science with a minor in Native American studies.

Sophie represented her nation at the White House Tribal Leaders Conference in December 2014, where she had the opportunity to share her drug-free initiative on the national level. Ms. Tiger continued her work with the White House by serving as a member of the steering committee for the first-ever White House Tribal Youth Gathering. In 2017, Sophie was elected Female Co-President after two terms of serving as the Southern Plains Representative on the National UNITY Conference Executive Committee. With the collaboration of her fellow Executive Committee, Sophie played a fundamental role in the development of the campaign “Our Sisters’ Voice”, which addresses issues involved with violence against our Indigenous women in a proactive and positive manner. Within her community, Sophie is a steering committee member of the first-ever Indigenous charter school in southwest Oklahoma. As the current Female Co-President of the NCAI Youth Commission, Sophie’s goal is to empower Native youth to realize the power of their voices in order to change Indian Country into what they envision living in.